My favorite books on homesteading, preparedness, and self-sufficiency.

I speak frequently about the concept of seeking out “real education”, or in other words, the education that the education system rarely provides. In most cases, the best way to do this is through in-person learning with a qualified mentor, but there is still an important place for books. The titles listed below are the best survival books and guides that I have read. The ideas and instruction that have shaped my journey to escape modern American life, and become self sufficient.

(if interested, you can also find a lot of really good prepper and survival books in PDF form for free online with a little looking.)

(Expand Each Title Below To See Reviews and Videos) 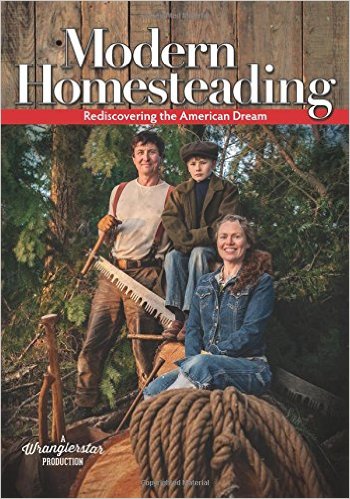 Last week, I was fortunate enough to score myself an advanced copy of the new Wranglerstar book, called “Modern Homesteading: Rediscovering the American Dream.”

Although I have been a subscriber of the Wranglerstar channel for a few years, there’s a lot of their story that I haven’t been familiar with. So I was really excited to dig in and hear about it.

What I found is that this book takes you behind the scenes of their YouTube channel, and gives you a really honest look at their journey–decision points, struggles, and the realities of life (i.e….money!), and the inspiration that life on your own terms is possible. While it may take significant amounts of work and heartache, it’s not out of reach.

THE MESSAGE: Anyone can homestead. Even if you live in the city, have a 9-5 job, are low on funds, or haven’t grown up with a tremendous amount of “hands-on” skill, there is still a version of homesteading that fits your situation. Find what that is, create it, and live it.

THE SUMMARY: The new Wranglerstar book gives readers a really “up close and personal” look at exactly what their family went through in their journey towards self-sufficient homesteading. As you read it, you will quickly find that they are not shy about point out their failures, their wasted time and money, or any of their other faults and shortcomings. 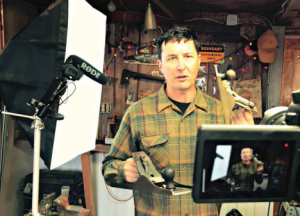 The book takes you through the journey of: their individual childhoods, adolescence, working years, the story of how they met/dated/married, their newlywed urban life, decision to homestead, and the transition to get there.

At the end of each chapter, there are also a few pages of what they call “Wisdom From the Journey”, as well as explanations of practical, hands-on skills. This makes for a nice balance between narrative and How-To.

MY FAVORITE PARTS: I really loved how Mrs. Wranglerstar was the primary narrator of the book, since we typically see and hear more from Cody on the YouTube channel. As a fairly new dad myself, I loved the details about their son Jack, and the efforts that they have gone through to involve him on their homestead. I liked how they shared all the details of getting their land–what a saga!!

WHO IT ISN’T FOR: People that can’t handle references to God or spirituality. The Wranglerstar family is a faith-filled, Christian family. This journey, has really been a journey of their faith. Through their journey, they have paradoxically found that the more they relied on God, the more “self-reliant” they became. I really enjoy this element to their story, but if this is upsetting to you, it’s not the book for you.

Big thanks to the entire Wranglerstar fam and their publishers for all their hard work on this one!here:

Get your copy of Modern Homesteading: Rediscovering the American Dream here.

Looking for a good book on self-sufficiency?

Better Off is the story of an academic east coast couple that decides to go without electricity for a year.

To do this, they relocate to an Anabaptist community they refer to as the “Minimites” (like the Amish or Mennonites but more hardcore in their rejection of progress). There they live and work the land, forgoing conveniences like:

But in doing so, they also become savvy in many of America’s long forgotten agrarian skills like:
Think you could do it? Get Better Off here. 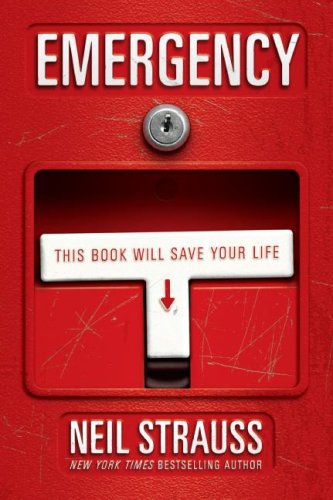 Unlike other survival books that contain checklists and step by step instructions, Emergency is the story of Neil Strauss’ journey from “city softshell” to “bonafide survivalist”.

In short, it’s all about how to become Jason Bourne.

While Emergency isn’t necessarily aiming to be a step-by-step recipe for becoming invincible, there are plenty of self-sufficiency “how-to’s” scattered throughout. And while I honestly did find every single page enjoyable (there are 414, not counting the credits), allow me to share with you 4 specific reasons that I fell in love:

1) Treasonous Honesty–As shameful as it is, prior to reading this book, I had no clue of just how many liberties the Federal Government had taken away from the American people over the last decade (That’s not really treason I guess…according to this book we have the 54th freest press in the world, so we probably still have some freedom of speech right?). This book gives an account of some of the more notable. Things like:

3) The Illustrations–Ever wanted to learn how to turn a credit card into a knife that isn’t picked up by metal detectors, or how to break out of flexi-cuffs? Just follow the illustrated instructions throughout the book and you can learn both. Informative and downright entertaining, there are a total of 13 DIY comics to help you on your way. Additionally, there are a couple hundred photos scattered throughout the book (showing Neil’s firearms, bug out vehicles, solar stills, certifications, etc). Call me a kid, but I still love a good picture book.

4) Resources Galore–Throughout the book, Neil references tons (and I mean TONS) of different training programs, contacts, and books that help him along his path. Tracker school, gun training, medical certifications, and all kinds of different books that he’s read. These provide an invaluable resource to those of us on a similar path (My very next book was because of his mention).

One thing I will say, is that if Neil really did do everything that he says he did in this book (and I think he did), the guy has some seriously deep pockets. Plane tickets everywhere, gun purchases, training upon training (many of which are over $1000), flying lessons, and so much more. Maybe he’s just got an awesome agent that got him everything comped for mentions in the book–who knows. I’ll be honest, it made me feel a little like a poor kid looking longingly at the Christmas storefront, but hey, it was still incredible to hear about either way.

Love it. Hate it. Or do whatever you want. I could probably keep rambling on until you’re bored to tears, but I’ll just keep it short and end by saying that this book truly is the most enjoyable and eye-opening book I’ve read since 2007. Take that for what it’s worth. And if you do pick it up, I’d love to hear your favorite part.

Pick up Emergency at Amazon here.

Off The Grid Homes 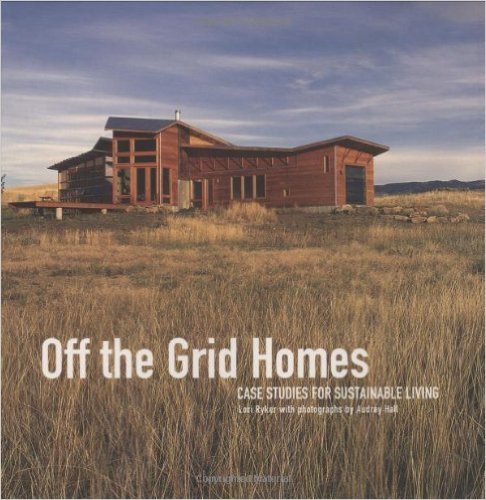 Even though I’m cooling my heels in the Boston Marriott, I wanted to make a quick prepisode about the book “Off The Grid Homes.”

Although I used it as my in-flight reading for this trip, it’s essentially a coffee table book for preppers–tons of pictures, and light on copy.

It explores the solutions that 6 homes across the globe used to achieve the off-grid goals of alternative energy, water collection, and sustainable architectural design.

I have to say that my favorite parts of the book are the “break out” sections in each chapter, which teach in greater detail the principles behind each off grid technology. In addition to these, there are also info pages at the end of each chapter, recapping the materials and technologies used for each house.

If you’re looking for something interesting for the coffee table, the bathroom, or a gift for a prepper–this is it! Get your copy here. 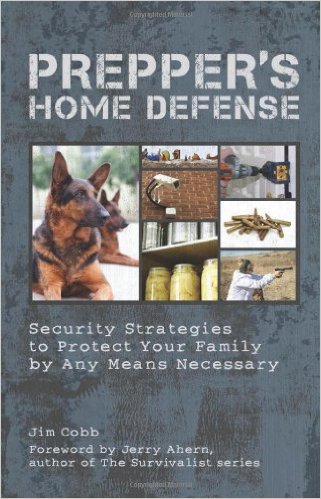 It covers several topics related to security that a prepper would want to be aware of, including things like:

In particular, I really liked:

I really enjoyed this book, and it will be one that I go back through often. I score it a 94/100!

Snag your own copy here and let me know what you think!

Bug Out Vehicles And Shelters 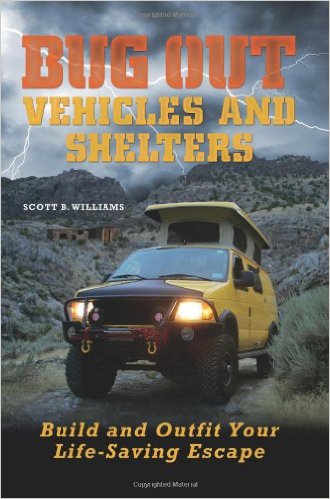 Just read Bug Out Vehicles And Shelters by Scott Williams.

Wanted to take a few minutes and share my thoughts for you in a video book review.

Big thanks to Scott Williams and the folks at Ulysses Press for their work on this! You can check out more of Scott’s books and regular updates on his blog Bug-Out Survival. 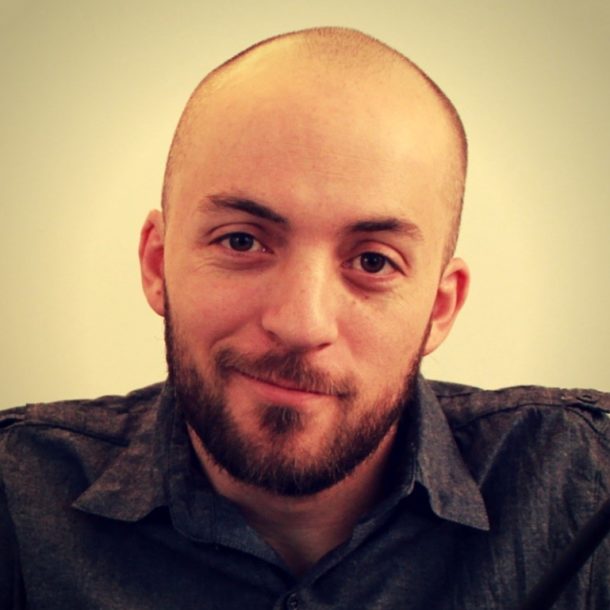 I WANT YOU TO HAVE A WELL-SECURED, SELF-SUFFICIENT HOMESTEAD.

Where you can produce water, food, fuel, and energy, and where you are in all ways, captain of your own ship.

You have Successfully Subscribed!

I hate SPAM, and promise to keep your email address safe.